In anatomy, margo is the Latin name for the edge of a structure.

"In ten weeks of improvisation and rehearsal work, the Hamburg choreographer and dancer Victoria Hauke developed her new piece" margo "with her partner Ina Regensburg, the illustrator Katrin Bethge and the musician Veit Kenner , Projections and sounds had its premiere in the Barlach Hall K. Victoria Hauke shows a coherent and formally coherent choreography with clear and reduced means. Developed and repeated in the beautiful, neutral white, the slightest changes in color, light and dark seismographically registered gallery space and they play around motifs of heaviness, falling and catching, the tilting of the body out of balance. The weight of the head initially sets the torso and limbs in vibration. The dancers, who are alike in costume and hairstyle, sometimes function as a mirror image of the other. Merging with each other or with the bright background surfaces. At one point, a growing shadow pushes them from the room onto the ramp. Then again they initiate a new sequence through walking patterns. Similar to the balls in the picture, the impulses continue, emanating alternately from sound, bodies and projections. In the second part, the dancers, now in black, enter the play of light as their own shadow and shadow figures. Once Ina Regensburg seems to revolt against the rules in a comically rabid "boxing and kicking solo", but gives up again after three attempts. Victoria Hauke, on the other hand, hugs the swirling sand and light streaks on the walls in slow loops and swings until the body contours become blurred. In what appears to be the same, unconventional idiosyncratic things emerge after all. And "margo" as one of the most successful works by the Hamburg choreographer. " 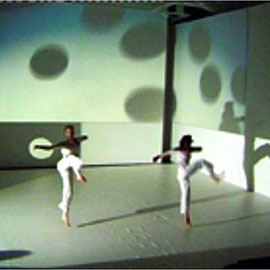 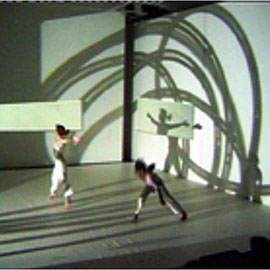